A Page of Madness 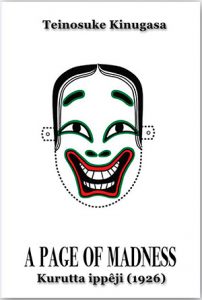 A Page of Madness (1926) or Kurutta Ippeiji is a silent film by Japanese film director Kinugasa Teinosuke. It was lost for fifty years until being rediscovered by Kinugasa in a shed in 1971. Every generation has turned out a handful of directors whose work has broken the mould to go far beyond the standards set by their contemporaries. One of the first of these was Teinosuke Kinugasa, who all the way back in the 1920s was busily familiarising himself with developments in European cinema. He became the first director in Japan to realise his ambition of treating cinema as a distinct art form in its own right, divorced from the commercial concerns of the new mass-audience medium.

Based on a treatment by the later 1968 Nobel Prize winning novelist Yasunari Kawabata, A Page of Madness seems a far cry from the standard theatrically derived Kabuki adaptations produced at the time. It’s a simple story of a retired sailor who has taken a job as a janitor in an asylum to look after his insane wife; however a synopsis of the plot can’t begin to explain the power of the film, nor the audacity of its cinematic vision.